Recordar in Spanish means to remember, coming from the latin word recordari.  The prefix re means again/recall and the root cor means heart. The literal translation is: to recall through the heart.

Recordar Productions is dedicated to creating media that speaks to the heart.  An independent production company based in Northern California, we turn the lens of the camera to reflect the ancient cultural wisdoms still living today. We turn the lens to the waters, the winds and the roots to reflect the wisdom of the earth. We turn the lens to the wondrous ways in which people and nature meet: the colorful celebrations, the voices that harmonize with the birds, communities working together to restore balance. We turn our lens to those standing up with dignity and strength to the forces threatening the continuation of diverse life on earth. Through sound and image, we strive to plant the seeds of a possible future and awaken the remembering of how all life is interwoven.  Learn more about Recordar Productions

4direcciones is an award-winning Colombian production company specializing in high-quality cultural, and environmentally-conscious content for film, web and television. Co-founded by a strong creative duo of audio-visual artists with established careers in film, television, and documentary production, our credits include acclaimed projects on art, history, and the Amazon for regional and international television stations. On-going collaborations with distinguished filmmakers like Peter Webber (Girl with a Pearl Earring), and an internationally recognized animation studio, allow us to develop the highest-quality socially relevant projects, while strong alliances with NGOs like Gaia Amazon, provide us with unprecedented access to indigenous communities. We are currently developing an animation studio devoted to content for children with projects set up to debut worldwide. Learn more about 4Direcciones

Sophie Cooper is an award-winning filmmaker whose work explores the intersections between creative resistance and the celebration of cultural diversity. Originally from a small mountain town in Northern California, she began filmmaking while working as a youth arts activist in post-war Kosovo from 1999 – 2003. A founding member of Crossing Bridges Productions, she worked with a small team of filmmakers to direct, edit and produce documentary content for Kosovo’s National Television (RTK). An alum of the University of California at Berkeley and FAMU Film Academy in Prague, Czech Republic, she has partnered with a variety of Civil Rights and Environmental Protection organizations in creating films to engage audiences throughout the world. Sophie is also a musician, a vocal coach and a mother living in Northern California. Learn more about Sophie’s music 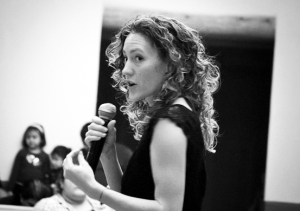